Catan GOT Brotherhood of the Watch

The Brothers of the Night?s Watch recognize you as a natural leader as you struggle for promotion within their ranks. You hope to gain recognition by improving infrastructure in the area south of the Wall known as the Gift. Drawing sustenance from this unforgiving landscape offers enough challenges, but you must also man and defend the Wall against the onslaught of Wildlings fighting their way into Westeros to escape the horrors that awaken in the North. Build, defend, and rise above your brothers to become the new Lord Commander. But be wary?the north holds many dangers, and winter is coming.*The battle to defend the Realms of Man begins in A Game of Thrones Catan: Brotherhood of the Watch, a new strategic game designed by Klaus and Benjamin Teuber and grounded in the engrossing world of George R. R. Martin?s A Song of Ice and Fire series. Take the Black. Defend Westeros. Become the Lord Commander.***Exciting strategy game based on a song of ice and fire series by George R.R. MartinBuilds upon Catan gameplay with the battle against wildlings, climbers, and GiantsPlayers develop the gift with the help of iconic heroes of the night’s watchPerfect for any game night with family or friendsDesigned for 3-4 playersRecommended for ages 14 and upGame playtime is 60-75 minutesComes with everything needed to play*About ACD Distribution**Since 1993, ACD Distribution has been a leading distributor in the toy and hobby gaming industries, serving both national and international customers. We work with over 350 publishers to offer a wide array of items from the classics through the hottest new releases. Our tremendous growth over the years is a result of a passion for our products and a commitment to build effective partnerships with retailers and publishers. Our staff continually strives to provide the top customer service in the industry. That’s why we are ””Simply the Best””?.**More Info**George R.R. Martin’s best-selling book series ””A Song of Ice and Fire”” is brought to the screen in the medieval fantasy epic known as ?Game of Thrones?. It’s the depiction of two powerful families — kings and queens, knights and renegades, liars and honest men — playing a deadly game for control of the Seven Kingdoms of Westeros, and to sit atop the Iron Throne. Game of Thrones has a dedicated legion of fans and is currently awaiting its eighth season.***** 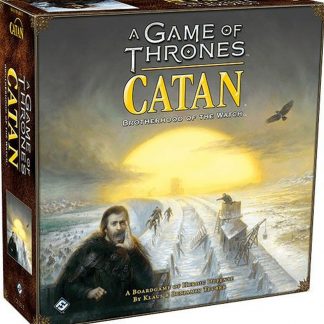 You're viewing: Catan GOT Brotherhood of the Watch $79.99
Buy Now