Batman?s third cover appearance on Detective Comics was by far his best. This classic cover from issue #31 (October 1939) is highly sought by collectors and captures the essence of the dark, creature of the night as Batman was portrayed in his early appearances, and before Robin the Boy Wonder arrived on the scene seven issue later in Detective Comics #38*Vintage PrintClassic comic book coverFeatures your favorite heroes and villainsShow off your fandom*About Asgard Press*Asgard Press has been creating and publishing exhibition-quality calendars, books and stationery since 1999. Historic college football souvenir program art was introduced in 2005 with ?Vintage Michigan,? featuring Wolverine game day program covers from the early 1900s-1960s. Today, more than 80 colleges and universities across the country are featured in this collector?s series of calendars and stationery. While preserving history, Asgard Press also tries to make socially responsible decisions whenever possible, including the use of eco-friendly materials across its entire product line, and only partnering with manufacturers that uphold the highest standards in working conditions and policies for its employees.* 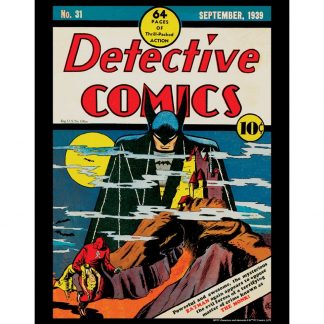