Organ harvesting just got more intense! With OrganATTACK TEAMS Expansion Pack, you form a team with another player and take on other teams, to ultimately, take them out. This expansion pack lets you Concur with your partner to launch a coordinated attack, administer CPR to bring a flatlined partner back into play, or Quarantine the other team to take them out of play. Assemble your Team and take on your opposers. The team with one organ ””standing”” is the winner. The TEAMS Expansion Pack comes with 27 new team play cards and 1 team play rules card. *Must have the main OrganATTACK game to incorporate this pack. **Recommended for ages 8+, may not be suitable for players who might be sensitive about discussing medical conditions (for example, playing a ””Cancer”” card as an affliction on an opponent’s organ card).***Comes with 27 NEW team play cardsIncludes 1 team play rules cardGreat for parties or gatheringsPerfect for game nightRecommended for ages 8 and upDoes NOT include main OrganATTACK game; purchase separatelyMay not be suitable for payers sensitive to discussing medical conditions*About Awkward Yeti**The Awkward Yeti encompasses multiple series by cartoonist Nick Seluk. The ongoing self-titled strip, The Awkward Yeti, follows Lars the yeti as he experiences everyday social awkwardness at work, in his social life, even while dating. The popular spinoff, Heart and Brain, follow the inner dialogue between the cynical, society-influenced Brain and the impulsive, optimistic Heart. Together, the three characters were metaphorically inspired by the concept of the Id (Heart), the Ego (Lars) and the Superego (Brain) but have developed their own personalities over time.**In addition to the two regular series, miscellaneous comics explore life, science and many other topics through ridiculous personification of organs, animals, and even rocks.**More Info**OrganATTACK! Is the family-friendly game of organ harvesting. A funny and twisted, yet somewhat educational medical-themed card game.* 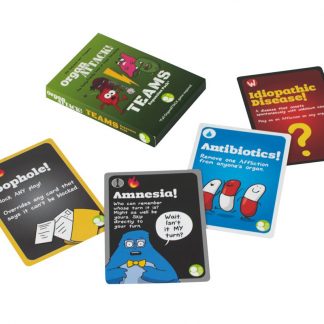